Restoration of the Venus Grotto

Origins and structure of the construct

The Venus Grotto in the palace gardens is a unique construction designed as an artificial flowstone cave and the highlight of King Ludwig II’s illusionary architecture. This grotto not only depicts the 1st act of Richard Wagner’s opera “Tannhäuser”, but also reproduces the motif of the Blue Grotto in Capri by means of artificial illumination in various colours. For this purpose, one of the world’s first electric power stations was created. The grotto was erected in only two years from 1876 to 1877 by court building director Georg Dollmann and landscape sculptor August Dirigl. In the 19th century, it presumably was the largest construction of its kind even though it had been designed only for the king’s own private use. 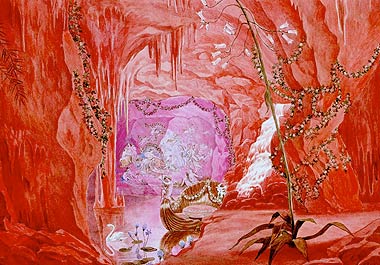 Grotto illuminated in red as “Bacchanal of Hörselberg“,
watercolours by Heinrich Breling, 1881

The basic construction consists of 1.7 m thick walls made of limestone rubble and solitary pillars made of rubble stone or cast iron. A rubble stone arch spans over the entry and exit area while the main grotto has a vast vault made of brickwork. On the outside, the vault was sealed with liquid tar and then covered with soil.

The shell visible from the inside is made of plaster applied to burlap or iron mesh. To achieve an authentic look of the surface, some of the plaster was poured or fabric soaked in plaster skilfully applied. The surfaces are painted in colour and partly covered with mica to achieve a sparkling shiny effect in combination with the changing coloured illumination.

Problems with moisture and damage to the construction 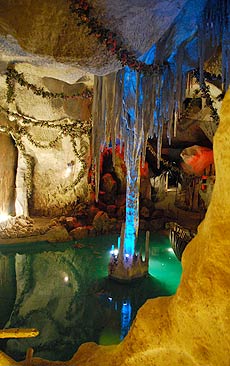 Shortly after completion of the grotto, problems with moisture became apparent. For this reason, a roof was erected above the main grotto as early as in 1889/90. This, however, could not fully solve the problem as water flowing underground still penetrates through the thick natural stone walls, in particular after heavy rains or when the snow melts.

Today, the damage caused by water in the course of time is very obvious. The moisture rising from the lake inside the grotto also contributes to the continuing decay of the shell and interior. Thus safety measures and restoration works are urgently required.

The first safety nets were installed in the 1960s already in order to ensure the visitors' safety. In 1997, additional safety scaffolds were erected in the entrance and exit area and the safety nets along the entire visit tour were renewed and/or complemented.

Restoration measures and objectives, description of the project

The main objective is the restoration of the original, undisturbed impression of the grotto. The safety nets and scaffolds are to be removed again. The considerable amount of historic structure is to be consolidated and protected in a sustainable manner.

To achieve these objectives the following root causes have to be eliminated. 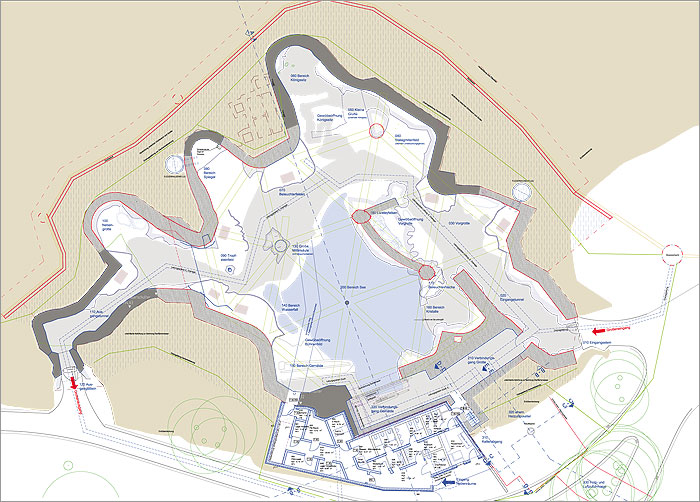 The planned restoration and reconstruction of the Venus Grotto covers the following areas to address the above challenges: 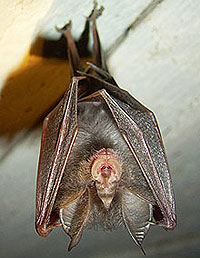 Conservation of nature and bats

As the construction site is located in the nature reserve "Ammergebirge", extensive requirements regarding nature conservation must be observed. The construction work is being monitored by nature conversation experts in order to prevent negative effects on protected fauna and flora.

Above all, particular measures are required for the bats living in the Venus Grotto, among others the "lesser horseshoe bat". In cooperation with bat experts specially devised new entry channels will be installed.

Schedule for the execution of construction works