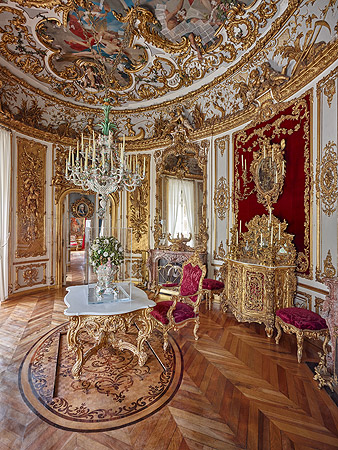 If one did not know the function of this intimate oval room, one could guess it from the decoration. Carvings on the walls depict the gardening, hunting, fishing and farming that provided the produce for the royal table.

This room is famous mainly for its table, known as the “wishing table” after the table that sets itself in the Grimms’ fairy tale, “The Wishing Table, the Golden Ass, and the Cudgel-in-the-Sack.”

Theodor Hierneis, one of the king’s cooks, reports on this habit in his memoirs: “He (the king) wants no one around him (at meals). Nevertheless, the dinners and suppers always have to be large enough to serve at least three or four people. This way, although the king always sits down to eat alone, he does not feel alone after all. He believes himself in the company of Louis XIV and Louis XV and their lady friends, Madame Pompadour and Madame Maintenon. He even greets them now and then and carries on conversations with them as though he really had them as his guests at table.”

back to the Pink Cabinet 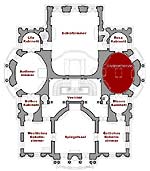 further on to the Blue Cabinet