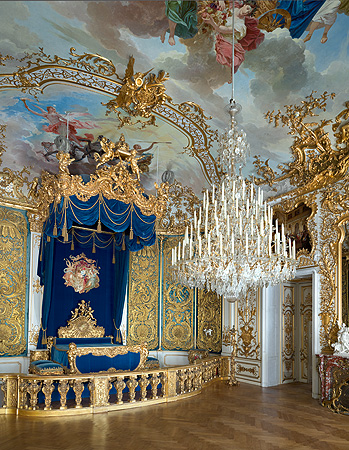 In the relatively small building, the king’s Bedroom is a surprisingly large room. The back of the room is enclosed in a carved balustrade. The magnificence that unfolds here could not be any greater. In the center, under a canopy, stands a gigantic bed, looking almost like a catafalque, in Ludwig’s symbolic color blue. Above, in the finest needlework – the embroidery in threads of many different colors gives the impression of a painting – is his coat of arms.

Above the canopy, angels in flight hold the Bavarian crown up in the air. The bed is flanked by two massive candelabras, practically giving it a sacral character. Six fabric panels overloaded with partly three-dimensional, gold embroidery of ornaments and putti make this section of the Bedroom the most expensive part of the whole palace.

Among the other furnishings, the pictures above the doors are of note. They show scenes from life at the French court: Louis XIV’s levée (the morning reception when the king gets up), the marriage of the Dauphin in the Hall of Mirrors in Versailles, the couchée (the evening reception), and a carousel (amusement ride) in the park of Versailles.

back to the Lilac Cabinet 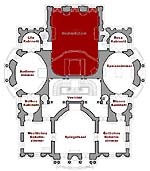 further on to the Pink Cabinet