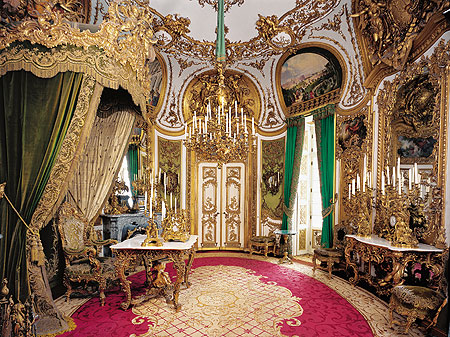 The climax of the series of rooms in the west wing is the opulently furnished Audience Room, containing numerous emblems of Ludwig II and references to the French court.

Of course, the secluded king never received legations in this relatively small room, which is why the Audience Room was also used as an office.

This explains the somewhat surprising placement of a table with a gold-plated bronze desk set under the canopy, which leads to a significant two-fold function of the place: it relates to both the throne and to a place to read. This was exactly what Ludwig intended, considering that he did not see himself as an active, reigning king, but strove for the ideal kingship in the manner of Louis XIV.

The French kings of the Age of Absolutism, through whom Ludwig legitimated his concept of the monarchy, are present in many ways, primarily in two equestrian statues of Louis XIV and Louis XV on the Italian marble mantelpieces. The pair of small, round tables with malachite tops were a gift to Ludwig II from the Russian Empress Marie Alexandrowna.

back to the Yellow Cabinet 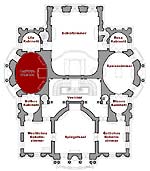 further on to the Lilac Cabinet