Vestibule (start of the tour) 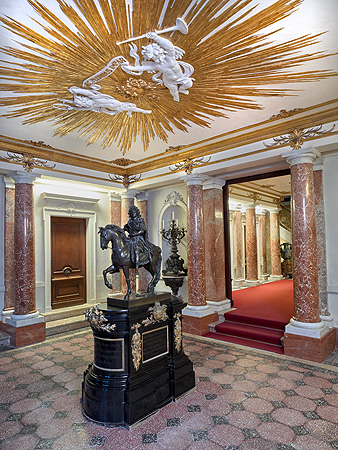 While the building seems more like a villa on the outside, the inside completely envelops the visitor in the atmosphere of a palace.

While the facades’ figures and reliefs glorify the Bavarian kingdom, the Vestibule commemorates Louis XIV of France. His statue stands proudly in the middle of the room. It is a copy, on a smaller scale, of a monument erected in Paris in 1699.

The reddish marble columns surrounding it like a temple determine the color scheme of the room. On the ceiling, the Sun King’s head is surrounded by golden beams of light. Two putti fly before them, carrying the motto of the Bourbons in their hands: NEC PLURIBUS IMPAR (Not unequal to many).

back to the Hall of Mirrors
(last room of the tour) 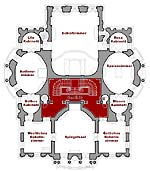 further on to the West Tapestry Room